The challenge was to raise $750 in one week. We have a couple of generous anonymous donors that pledged to match up to $750 in donations of their own. They will now fork over the complete $750 dollars because you went above and beyond.

We still need to raise quite a bit of money to reach our target goals before both marathons are finished (November 6th). So if you have yet to donate, please do so. Additionally, if you know of anyone that is generous and would like to be an anonymous backer, put them in touch with me. I think we should try this again later in October.


I just finished my last run of September 2016. It was a short four miles. Or rather, it was a normal four miles, but four miles feels short to me these days. It is a shame that the cool weather started so abruptly when I switched to tapering down. I really do not want to complain about the change in weather just yet, so that is all I'll say about it now. It feels really good to run in, and I don't mind needing an extra blanket at night just yet.

This was a fun run for me. I've been tracking all of my runs, feeding my numbers fetish. I've also be graphing all of my runs. I'm not that talented when it comes to data visualization (I'll pay you D.) but I enjoy staring at the little lines. This run was fun because it was the last run of september which is usually my biggest month of the year. This was my biggest month ever. Enjoy: 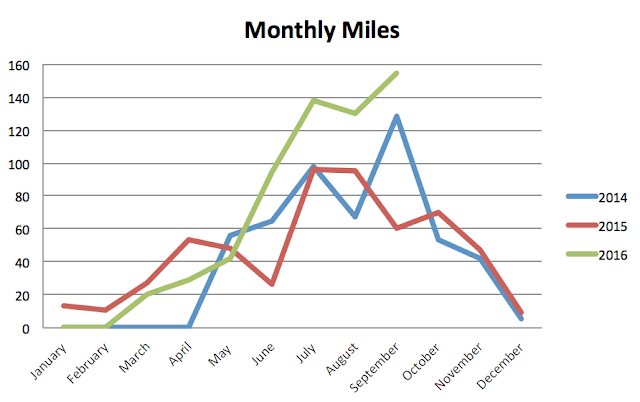 Posted by Andrew Lawton at 6:52 AM