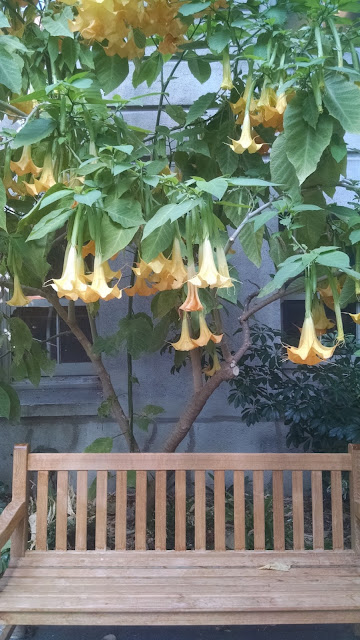 I looked up and felt ridiculous. My short pilgrimage had come to an end. In the plain courtyard I sat on the bench. I hadn't come for the bench, though I knew that was all that would be there. I sat for a moment longer. And then I left to wander back down through the green and bright of the waking world.

I knew there would only be a bench. Still I was hoping to find something else. I had come for him, or some tangible memory, or something. I hadn't planned this pilgrimage well.

It started when I left my car at the station and boarded the train into the city. I rolled slowly past miles of tightly placed homes, small and expensive. I switched to the metro and began counting down the stops as we popped above and below ground. It was 15. I had never been to Berkeley. It is beautiful. I didn't realize it was the first school of the University of California system. Calling themselves "Cal" makes more sense.

The physics seniors of the class of 2016 dedicated a bench to Charles Townes in the small courtyard next to his office. The old tree which had stood from beyond memory fell last year after he died. And in the passing of two such monuments they decided to redesign the little space into a courtyard to honor him. 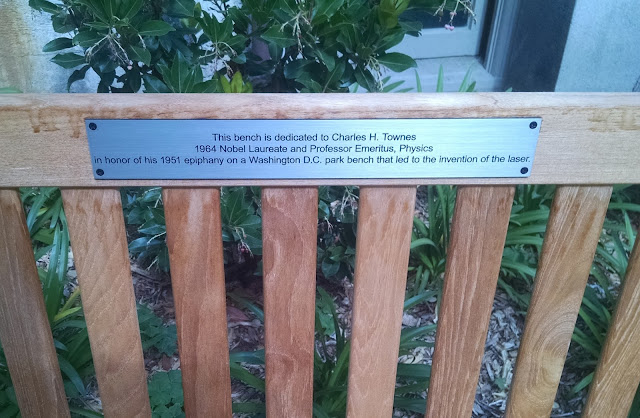 He told the story of the creation of the maser in his books and in person. And always he recounted sitting on the park bench in Washington D.C. next to the blooming azaleas. It was there he received his revelation. And it was there that the entire world changed.

Sitting on this bench 2500 miles away I knew I had come too late. Though, there wasn't much I could do about that. The simple reality was that I was born far too late. Still I had come and instead of an epiphany I just felt silly. I had wanted to feel a connection, some recognition of his spirit, something. But why? I didn't know Dr. Townes in any real meaning of the word.

While I had met him once, it was when I was very young, and at a funeral. Still, he was a bit of family lore and his name and story stuck with me. But for years he was only lore. Then in college I wrote him. I don't know who found his address, or what I even wrote him. But I still have the letter and papers he sent in reply to mine. Even now they number among my dearest possessions. In them he shared his thoughts and encouraged me to be a scientist and a religionist. He wrote in bullets. 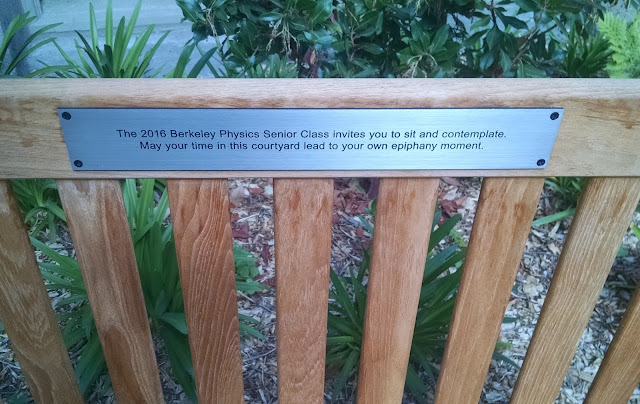 A few years later I invited him to come lecture at Yale and he did! I remember the beer he ordered at Mory's before his talk. I remember his lecture. I remember as much as I can. And I had the entire drive back to JFK with just him. He called the lab at 6 am local time, 3am at the lab (because he knew they would be working). He was always going. And he was 92 at the time. We parted at the terminal. He was off to California and then Qatar. And that was it.

Through the years I watched the news knowing some day it would come. And it finally did. I walked to the corner and bought the paper. It is still yellowing in my desk. The greatest experimental physicist of the 20th century. Perhaps that is more truly when this weird and slow and poorly planned pilgrimage began.

It ended in a little courtyard with a view of his old office and a few dumpsters. I didn't find him there. I didn't find a connection, any meaning, or even some special memory. I just found a bench. This family myth turned exemplar hero was yet again far ahead. I had come too late and he had gone to where I can not yet go, born too late as I am. So I went a bought a coffee.


In writing this post I remembered a video of Charles Townes reading poetry and thought I'd link it here. His bit starts at 20:20 (with a short introduction) I highly recommend starting there. Oh to be such a Renaissance man!