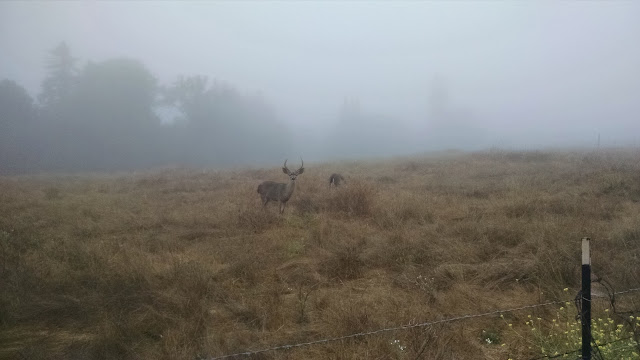 Mile 11-16 are uphill, strongly uphill. Really strongly. Water bottle is low. No opportunity for a refill until mile 19. Everything wants to stop. But I can't. The only option is distraction. Distracting one's self from tired legs, bursting lungs, and a thirsty mouth is an art form. It isn't easy. It takes practise and effort. Usually.

It is much easier when you keep passing very large scat, large and full of hair. These woods are full of lions. No need to slow down. No need to think about my lungs, or legs, or thirst. I just keep scanning the fog shrouded fields for eminent death.

This is not my normal Central Park run. This is Santa Cruz.
I was out in the west for work. It was a conference complete with dorm room accommodations and a pass to the dining hall. Breakfast was served promptly at eight and more importantly, breakfast promptly stopped at nine. Not wanting to go hungry till lunch I set my alarm for Very Early. My schedule called for 19 miles. I mapped out a route. At dinner I swiped a bagel and snuck it past the zealous food police. Back in my room I reviewed the route, and once more, and turned out the light.

It turns out that the sun is different in Santa Cruz. It rises much later than in NYC. And yes, I had changed my clock the appropriate three hours. It was black outside the open window. The lucky kids in Santa Cruz don't need air-conditioning. They never have to try to sleep when the cool of the evening is in the upper 80s. Each night the temperature drops into the low 50s. As it turns out this means it was dark and cold outside the open window. And I had to get up and run.
I ate the stolen bagel, gulped as much water as I could, and headed out. I was on the road at five. There had been a couple of street lamps near the dorm. But on the road the university was rather stingy. Soon I was away from the buildings and under tall trees. I couldn't see the lines on the road. I couldn't see anything. I started to think about mountain lions.

When I arrived and was given the keys to the dorm I was also warned that losing them would cost me $140. In a moment of unrecognized genius I took off the miniature flashlight from my key chain and placed the two dorm keys on it. And there in the darkness I remembered it in a flash of inspiration. It took me a bit of time to fish it out of the tiny pocket in my shorts but I could again see the white line under my feet.

Still the flashlight wasn't needed for much longer. As I ran out from the trees I ran into the fog and the black turned into a dark, blinding, wet grey. The fog condensed on my beard and dripped into my lips. The wall of grey lit up into bright white as A car materialized in front of me. There was no sidewalk, barely any shoulder. I muttered repeatedly, "this is safe."

I ran down towards town past sleepy blocks and sleepier houses. I ran to the edge of town and out on the wharf. Between the gulls, seals, and the horn, it was a musical place. Back in the sunshine of yesterday I planned on taking my cell phone so that I could take a few pictures of the sunrise and the town. It was now just a few minutes before 6am. And while it was now civil twilight, and noticeably brighter, it was still dark and foggy. I snapped a couple of pictures and with the fear of missing breakfast in my tummy I ran on.
I ran along a beautiful road that curved along the coast up towards the lighthouse. The road was flat and smooth and as the sky brightened and the fog thinned the view improved. All of the houses were on the right and the cliffs down to the ocean were on the left. In a few miles I reached the lighthouse. Built on a jutting curve of land, the light house is short and squat and home to the Santa Cruz Surfing museum. More importantly it also has a water fountain. I refilled my bottle, enjoyed another energy goo and continued to run.
At the 8 mile mark I refilled my bottle for the last time. As I left the little beach front state park I ran out of town and up Highway 1. I started looking for the trail that would take me up the mountain and back towards the campus. I didn't need to look very hard. I should have known any mountain ascent would start at the very bottom. The path quickly gave up all of the elevation I had gained since the wharf and even tunneled under the highway right where I started to climb the mountain. And climb I did.

The entire mountain climb averaged to about a 10% grade. But plenty of little bits were much steeper. I was digging into the hill. I was almost all on the balls of my feet. In seconds my lungs were bursting. In seconds my pace had soared. Suddenly I was really thirsty and tired. And then I past by a pile of recently deposited cat scat.

Usually keeping your mind off of the exhaustion is difficult on a long run. But the fear of being hunted, attacked, and eaten alive has a way of worming into one's mind. I tried to think about running and my tired legs, But all I could remember was that mountain lions are most active at dawn and dusk. I couldn't forget that it was dawn now and that I was running through thousands acres of state forests and fields. I couldn't shake the idea that I was moving and breathing like a overweight and severely injured deer. I couldn't shake the idea that I would miss breakfast while being breakfast.

I made my plan. I would keep my eyes very open. I would see the attacking cat. The plan failed to fully firm up past that first step. But it was a first step. I had some vague ideas of trying to look big, fighting back with the keys in my little pocket, and simultaneously soiling myself. That, save for the last bit, was the helpful advice the sign at the entrance gave: "If attacked, fight back!"

I scanned the fields of dry grass and fog for hungry cats. I kept my eyes peeled. And then I looked up and saw four large deer immediately in front of me. And in their bored glance my plan went out the window. A few paces later I stirred up a covey of quail. At least they seemed just as startled as me.

My water bottle quickly ran low. And the climbing mountain of fields and fog kept growing. There were more and more trail branches than I had seen on the map. I kept choosing up. At this point my fear of being eaten my tired legs were locked in a dead heat for my attention. Near the top of the mountain I saw my first sun beams. And Then I stumbled out of the fog and onto the top of the hill. I drank the last of the water and joined the road down towards the university.
To reach mile 19 I would need to run down to the road that led back up to the dorm. But my empty water bottle, my watch, and my legs all persuasively argued that I should cut it short. So when I saw a trail leading to what must have been the campus I took it. And since I'm writing this you know I was right. In fact, I made it back in time for breakfast. It was just as delicious dorm food ever was.
Posted by Andrew Lawton at 10:10 PM